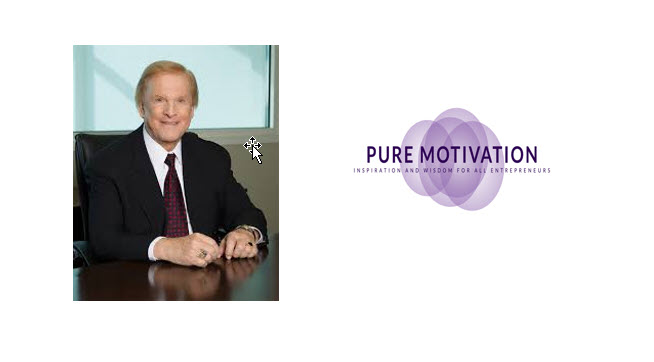 Today EQ (Emotional Intelligence) has become a buzz word in the personal growth space.
From my perspective Dennis Waitley was the first speaker to really start to bring the concept
of personal mastery and personal awareness main stream.

The first time I ever heard the name Denis Waitley was when I checked out a couple
of his audio programs, Seeds of Greatness and The Psychology of Winning from my
employers continued employee education library.

His work with USA Olympic athletes inspired a talk he called 5 Golden Rings which
is probably my favorite all time Dennis Waitley personal development session.

Dennis, like many personal development speakers from California kinda has a slight new
age slant, but his audio programs and books are just solid foundation Wisdom of the Ages
principles and concepts.  Dennis Waitley is very refined speaker much like Brian Tracy and
to some extent Jim Rohn.

Most of his career Dennis worked more in corporate environment than the entrepreneurial
world.  However in the early nineties he did join the board of Ussana, a network marketing
nutritional company and did seminars for their distributors all over the world.

Dennis Waitley was born in 1933, so he is not a spring chicken, but he is still speaking for
corporate clients to this day, sharing wisdom and principles that are as valid today as they have
always been and will always be.

Like many great personal development speakers, Dennis started with humble beginnings.  He
was born in San Diego his mom and dad where blue collar workers who worked in a warehouse
and factory.  Dennis attended the United States Naval Academy at Annapolis and became a
naval aviator.

After leaving the Navy, Dennis Waitley became a financial public relations representative
for an electronics company. Later, he was offered a job by Jonas Salk to be a fundraiser at
the Salk Institute for Biological Studies.

In 1976, his life was about to take a major turn.  Dennis spoke at a church and parts of that
talk became what the personal development world would come to know as
The Psychology of Winning.

He released the audio program to the public in 1978, which has sold more than 2 million
copies and which generated over $100 million in sales.   This program and many other Dennis
Waitley programs are part of personal development libraries around the world.

Waitley worked with Network Marketing Nutrition company Usana for several years
and was on their board. In 1997 there was some negative press about Dennis and his
credentials on the Usana website.

Usana is a publicly traded company so this made headlines for a few days.  The truth is
Dennis Waitly had nothing to do with this, and probably never read his Usana bio.  It
appears that someone at Usana corporate exaggerated the credentials of Dennis Waitley
and several other Usana corporate officers and board members

Why they think this matters is beyond me.  I guess they were trying to make the board look
as good as they could to investors. Some people feel the number of initials someone has
behind their name is the determining factor of success.  Just naive, who ever made this
decision would probably be well served actually listening to some of Mr. Waitley’s
materials.

Here were some of the headlines from 2007 regarding Dennis Waitley.

“The board of directors has regretfully acknowledged Denis Waitley’s decision to retire
from the board and acknowledges his contributions to USANA during his tenure as
a director.”

“Dr. Denis Waitley has decided not to stand for reelection to the USANA board of directors.
Dr. Waitley recently informed USANA that an error appeared in his biography listed in the
Company’s proxy statement and that he did not in fact earn a masters degree in Organizational
Development from the Naval Post Graduate School in Monterey, California. Dr. Waitley did
confirm that he earned a Bachelor of Science degree from the United States Naval Academy
in Annapolis, Maryland, and a Ph.D. in Human Behavior from La Jolla University. Dr. Waitley’s
board term will end on April 17, 2007, at which time he will retire as a director of the
Company.

“The board of directors has regretfully acknowledged Denis Waitley’s decision to retire
from the board and acknowledges his contributions to USANA during his tenure as
a director.”

Commenting on Dr. Waitley’s decision, Dr. Myron Wentz, chairman of USANA’s board of
directors, said, “It is with regret that we accept Dr. Waitley’s decision not to stand for
reelection. We appreciate all that Denis has done to help build this great company. Denis’s
lifetime of accomplishments speak for themselves.”

I 1,000 percent agree.  Denis’s lifetime of accomplishments speak for themselves.  What
did or didn’t happen with Usana and whose fault is was has no bearing on the number of
lives that have been inspired since The Psychology of Winning was released in 1978.

Waitley was also a founding member of the National Council for Self-Esteem and a former
chairman of psychology for the U.S. Olympic Committee’s Sports Medicine Council.

Denis Waitley is one of the most respected keynote lecturers and productivity consultants
in the world. He has helped millions of individuals look at themselves and develop their own
emotional intelligence. He has studied and counseled leaders in every field from “Fortune
500” top executives to managers of multinational corporations, from NASA astronauts to
Superbowl and Olympic champions, from heads of government to family and youth groups.

He has made an positive impact on the world and in our book, he is a legend.

With over 10 million audio programs sold in 14 languages, Denis Waitley is the most-
listened-to-voice on personal and career achievement to ever walk the planet.  He is the
author of 14 books and audio programs including global best-sellers:

The Joy of Working

Empires of the Mind

The Psychology of Winning is the all-time best selling program on self-mastery. Dennis
Waitley is a legend and every personal development student should study his work.

DENNIS WAITLEY  THE PHYCHOLOGY OF WINING

I found this video on YouTube and thought I would place it here for our readers.

Repetition is the Mother of Learning!   It is my hope that you will add this
program to your personal development library.